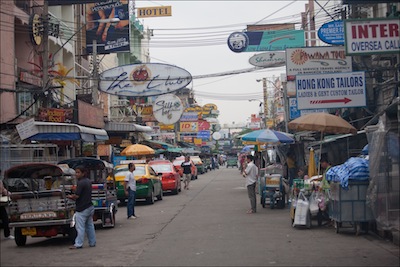 Khao San Road, Bangkok (correctly pronounced ‘cow’, but regularly pronounced ‘koh’) is a 1km stretch of road close to the Chao Phraya river that has long been associated with some of the best Bangkok guest house. As a result, money-conscious tourists have flocked here and over the years the area has grown, both in size and popularity.

“Khao San Road” now describes not only the street itself but the surrounding roads,and is a phrase known by every taxi driver in the city. The main road itself is recognizable for the bunting hung along the length of the street, as well as the eager taxi drivers waiting at either end for their next customers.

Khao San Bangkok is popular among tourists for many reasons: 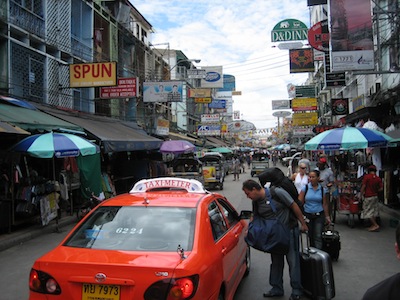 From Airport to Khao San

Coming from the airport the taxi should cost 300-350 Baht, including the 65 Baht for the toll roads. Travelling in light traffic the journey should take 45 minutes, but it will take considerably more during rush hour.

Insist on using the meter as it will always be cheaper than the fixed price the driver gives you. If the driver refuses to put the meter on or if it’s ‘broken’ just get out and find another taxi, often the meter will ‘magically’ fix itself when you do so!

There is also a free shuttle bus from the airport that takes you to the Public Transport Interchange, from there you can either take a tax or catch bus No. 556 which will drop you off half-way between Khao San Road and the Democracy Monument. 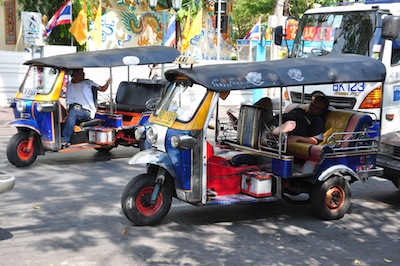 Khao San Road is a short taxi ride from Bangkok’s main train station and the north and south bus terminals.

You’ll have no trouble getting around the city from Khao San road, there is an endless stream of taxi drivers ready to take you anywhere and numerous public buses stop in the area. Taxis far outnumber tuk-tuks and are generally a more reliable way to see the city.

Although Khao San Road is not accessible from the Sky Train or Metro, you can take the Chao Praya Express boat from Phra Athit pier to a number of Bangkok’s sights – The National Gallery, Phra Sumen Park, Wat Po, Wat Arun and the Grand Palace for example, which makes a great alternative way to see the city.

When it comes time to leave Bangkok, one of the many travel agents can book your onward bus, train or flight for you. As trains are more comfortable than buses for overnight travel they tend to get booked up quicker.

However, you should still be able to book your onward travel a couple of days before your departure date without difficulty, unless it coincides with a national holiday in which case booking a few days before departure is advisable. If you have the time you can book your own public BKS bus from any of Bangkok’s main bus stations and avoid paying the agent’s commission.

Tourist buses arriving in Bangkok from all over mainland Asia invariably terminate at Khao San Road, making it a convenient place to stay. One word of warning though, as tourist buses often arrive before the sun has come up it may pay to book in advance an accommodation, particularly in the main tourist season of November to March, or you risk wandering the streets half-asleep searching for a room.

Maps of the city can be picked up from the Bangkok Tourist Information Office on Phra Athit Road and if should need it, although hopefully you won’t, there is a Police station located on the western end of Khao San Road.

→ Click here to find a hotel near Khao San Road!