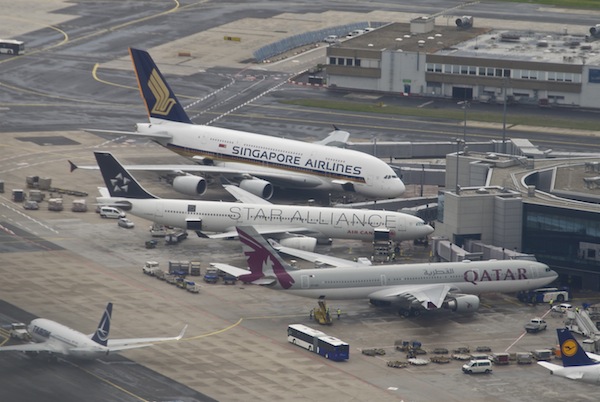 The end of the year is in sight, and the time is ripe for booking your next holiday. Europe is always a popular destination and has a city for every type of traveller. Getting to Europe, too, is easier than ever, thanks to a host of airlines, which now offer direct and transit services to major European cities. Picking an airline, therefore, is trickier – you have to take into account an airline’s fares, service standards, entertainment options and convenience.

We have picked the five most popular airlines flown by Singaporeans to Europe and weighed their pros and cons. Use the guide below to determine which airline you should jet off to Europe with.

Picking an airline will depend on your destination, itinerary, service expectations and of course, budget. Those looking for a simple, fuss-free flight to Europe and who can afford to pay more should opt for the no-brainer: Singapore Airlines. Those looking to stretch their dollar should consider Emirates or Qatar Airways for their low fares. Others who want to squeeze in as many sights as possible in one holiday should take advantage of Etihad’s complimentary night stay in Abu Dhabi, while those flying to obscure cities in Europe should travel with Finnair.

Fares: By far the priciest airline on our list; be prepared to fork out at least S$2,000 for any European destination.

Convenience: Flies direct to all European destinations from Changi Airport Terminal 3, making it the most convenient and hassle-free way to fly to Europe.

Destinations: Qatar flies to major European destinations, with a mandatory stopover in Doha, Qatar. For $50, all passengers can access the luxurious Oryx Lounge in Doha while waiting for their connecting flight.

On-board comfort: Smaller seats than most airlines, but the airline’s acclaimed food & wine choices, and service make up for this small disadvantage. Its in-flight entertainment system matches up to that of Singapore Airlines.

Convenience: Flights depart from Changi Airport Terminal 3 and most passengers have to wait less than two hours in Doha before connecting to their next flight.

Destinations: Fewer destinations in Europe than other airlines on the list; passengers fly through Abu Dhabi, UAE. However, its lounges are exclusively for first and business class passengers. Etihad offers a wonderful deal for stopover passengers: a complimentary one night stay deal, and a discounted rate for the second night onwards. The deal covers major hotels, including Intercontinental and St Regis Abu Dhabi.

Fares: Slightly more expensive than Qatar Airways and Emirates. Fares begin at $1,300 for a flight to Paris and usually do not go higher than $1,700.

Destinations: Among the three Middle Eastern airlines, Emirates has the widest reach in continental Europe. Emirates’ lounges are also exclusively for its first and business class passenger.

On-board comfort: Emirates has the closest service standards to Singapore Airlines, and is frequently praised for its extensive food and wine menu, premium entertainment options and warm service.

Convenience: Flights depart from Changi Airport Terminal 1 and passengers arrive in Dubai no later than 6am, allowing them to catch an early morning connection to Europe.

Destinations: The most comprehensive reach in Europe among the five airlines on the list, Finnair flies to practically every European city one can think of. Passengers transit through the modern and sleek Helsinki Vantaa airport, whose facilities often resemble an airline lounge!

On-board comfort: An average airline, Finnair offers warm service and decent food and entertainment options (nothing to rave/rant about).

Convenience: Flights depart from Changi Airport Terminal 1 and passengers arrive in Helsinki early in the morning, also allowing them to catch an early morning connection to Europe.

Next post: 7 Things You Need to Know When Booking a Hotel Room