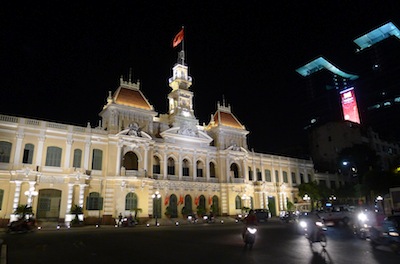 It is a good practice to use popular online hotel booking websites such as Agoda, Expedia or Wotif to search for Ho Chi Minh hotel promotions. I started out by browsing the hotel rates offered by Agoda.com for Ho Chi Minh city, and cross checking them with those offered by Wotif.com.

Lesson learnt: Online hotel booking websites may not always offer the best deals. Be diligent – do your research and compare prices. 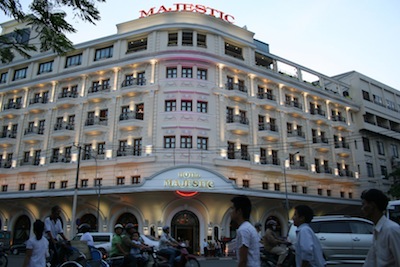 Some of the 5-star hotels in Ho Chi Minh District 1 include the Caravelle, Intercontinental Asiana Saigon, Park Hyatt Saigon and Sheraton Saigon Hotel & Towers (all located within walking distance of each other) are ranging from USD130 – USD340. Historical hotels such as Rex Hotel Saigon and Majestic Hotel also command high prices between USD130-USD160. These hotels are centrally located to the ‘touristy’ attractions in the city, such as the Opera House.

Currently, online hotel agent, Agoda.com is offering some super savings on hotels in Ho Chi Minh District 1 for as much as 50% off the hotel rates:

For many, the rates offered on Wotif.com are at least half their published rates. The top ‘brand’ names’ promotions are the ones with the largest discounts – at average USD150 per night. These are the five-stars, luxury-class, historically significant, brand new hotels in Ho Chi Minh City.

Comparing the hotel prices (inclusive of tax) between the hotel promotions and Wotif.com – Wotif’s last minute deals, if available, are quite attractive:

If you are game enough, try the WOT Mystery deal. A WOT hotel in Ho Chi Minh city goes for USD80 per night (4-5 star rated).

Lesson learnt: Wotif’s last minute deals and WOT hotel mystery deals are surely worth checking out if your traveling dates are flexible or you are someone who ever claimed “I don’t care which hotel, so long it’s a 5-star hotel at a huge bargain!”

Upon my arrival in Ho Chi Minh city, I realised that the city has heaps of accommodation options to choose from. Although I did not do an exact count, I daresay for every one non-international hotel brand, there are at least two or three other options to suit all kinds of budgets and preferences.

Tripadvisor.com, for example, is one website to check out cheap hotels in Ho Chi Minh City. Out of the 30 best rated hotels, more than half featured have local names, and many have been consistently receiving great reviews from travellers all around the world.

Some small but recognizable chains of hotels operating in Ho Chi Minh City are An An Hotel (1,2), the Saigon Mini Hotel (1, 5), Liberty Hotel (1, 5) and Asian Ruby Hotel (1,2,3). Their rates are mostly below USD40 per night, which are very affordable.

Pay More for Hotels in District 1

As I made my way through the city, I discovered that some of the ‘lesser-known hotels’ could be relatively hard to find and locate – they could be nondescript buildings packed between two non-related buildings, or located right in the middle of nowhere. This made them harder to find, even for taxis.

Some smaller hotels may not have amenities such as swimming pools, but if they are located at District 1, they still command a higher price than others of the same ranking. For instance, a boutique Catina Hotel charges USD97 a night, much higher than other hotels of its same class as it is near the Ben Thanh Market, the Caravelle and the Sheraton.

Even under the same hotel chains, An An 1 Hotel in District 1 charges USD40+, doubled the rate of the An An 2 Hotel (USD20+) where it is located in downtown of Ho Chi Minh city.

Though the area around Ben Thanh Market has a number of reasonably-priced and decent hotels, I would stick to hotels in District 1 for its location as the city sprawls out. For the convenience, I would rather pay a little more as it is not always easy to navigate in partly due to the busy traffic.

Next post: Booking a hotel near Lan Kwai Fong?