Okay, I need to confess. I do have a personal agenda for this Malacca weekend trip – to try the famous Satay Lok Lok or Satay Celup (skewered meat dipped in piping hot secret Satay sauce) in Malacca. I have watched Satay Lok Lok being featured on travel programs and also heard rave reviews from friends. So, I convinced the group to have dinner at Restoran Ban Lee Siang Satay Celup @ Jalan Ong Kim Wee.

As early as 5.30pm, we arrived to the restaurant but it was already fully packed! Luckily, the waiter led us through their kitchen to the rear of the shophouse where there were some empty tables. We split into two tables and in no time we were all sweating. The place was too stuffy with no air-con. I can’t imagine if the weather is hotter, the feeling would be like dinning in an oven. 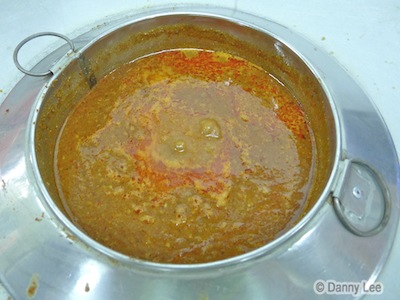 Satay gravy in the pot

The seasoned waiter quickly came and took orders for drinks while he poured the Satay gravy into the flushed metal container on the table’s center. He lit the fire to heat up the gravy and told us we could start our feast now – just go to the front counter where the big fridges are and pick whatever we like. Each skewer costs RM$0.60.

Off we vanished. Soon we returned with different kinds of meat and seafood like prawns and I picked up a lot of abalone sticks. In the end, our table devoured about 60 sticks of skewered meat. 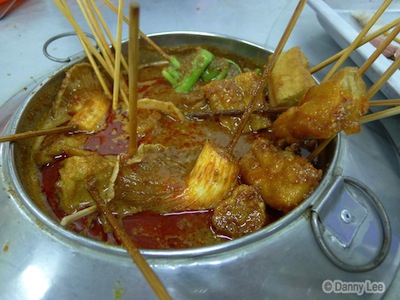 Frankly, I do not find this famous Satay Lok Lok sensational. It is just okay for me as the Satay gravy is too diluted. The shocker came when we were about to leave – instead of clearing the use pot of gravy, the waiter continues to top up Satay gravy into the same metal container for the next customer! So imagine if I had dipped my half-eaten skewer of meat into the gravy pot, the next customer would be tasting my saliva! Yikes!