One Day Tour in Macau 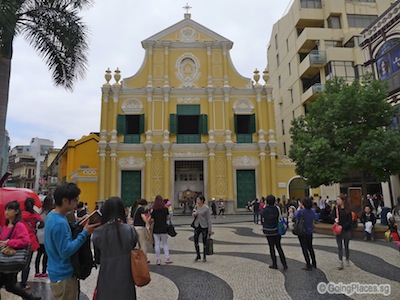 During my most recent 5D4N trip to Hong Kong (early December 2012) with my wife and 70 years old mother, we decided to make a day trip to Macau since Macau is just one-hour ferry ride from Hong Kong. Getting into Macau from Hong Kong is fairly easy regardless where you stay – in Kowloon or Hong Kong Island. There are two ferry terminals: one in Tsim Sha Tsui (Kowloon) and the other in Sheung Wan (Hong Kong Island). Since we stayed in Kowloon, we took a ferry from Hong Kong-China Ferry Terminal (中港碼頭), located at the China Hong Kong City shopping center, Tsim Sha Tsui.

How To Take Ferry From Hong Kong To Macau

We arrived at China Ferry Terminal about 9am, thinking it would be easy to get an economy class ferry ticket to Macau as we researched the turbo-jets depart in every 15 minutes interval. But we were caught in surprise when we were told at the counter that only luxury class tickets were left for the 10am slot. We were reluctant to buy the luxury class tickets that costs HKD266 (about USD35) per adult. The economy tickets, on the other hand, costs about HKD158 or USD20 per adult but only available for 2pm onwards. While we were discussing our options, a ticket scalper who ‘specialized’ in hanging around tourists like us who couldn’t get the economy class tickets, approached us. He offered us the economy ticket at HKD15-20 more but with an immediate departure at 10am. We took the offer since we did not have much choice given that we only have a day in Macau. Furthermore, it is still cheaper than paying for the luxury class tickets which are similar to economy class tickets except you get ‘complimentary’ meals and drinks.

Tip #01 – Ferry departs on time, so arrive at the Ferry Terminal 15 minutes before the departure time or you may just miss the ride and don’t expect refund.

Tip #02 – Book ferry tickets one day in advance from the ferry counter or from the ferry operators’ booking website to avoid disappointment especially if you are traveling in a big group. 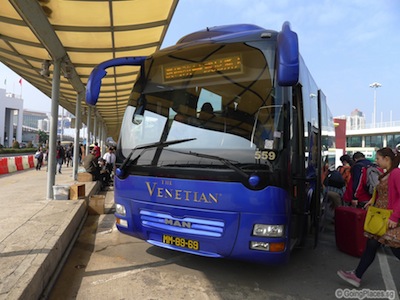 The turbo-jet ride was uneventful except somehow the Chinese tourists onboard never got tired chatting loudly throughout the entire ride. This could be annoying for those who prefer a quiet ride.

We reached the ferry terminal in Macau (Outer Harbour Ferry Terminal or 外港客运码头) at 11.15am. Once we cleared the customs, we were bombarded by touts asking us to hire a car with them that includes a tour guide who would bring us around Macau for a city Tour. Just ignore them as Macau is small enough to travel by bus, taxi or even walking and there are free shuttle bus services that bring tourists to the various Casino and Hotels.

To take the free shuttle bus, we went out of the ferry terminal, walked across the underpass which led us to the coach bay on the other side of the road. Over here, there were many free coaches belonging to the different casino that you can pick and choose. We took the Venetian Macau shuttle bus and enjoyed the 20-minute bus ride to Cotai strip where the Venetian Macau Resort is located. Along the way, we saw the old and grand Lisboa casinos by Stanley Ho, the Goddess of Mercy bronze statue, the magnificent Galaxy casino. 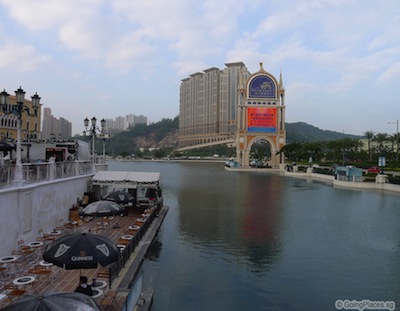 When I arrived at Venetian Macau, I regretted not spending a night there as I was skeptical about Venetian Macau Resort Hotel being rated the most highly recommended hotel in Macau by travelers. And suite room is not as expensive as I thought. Currently the room rates are going at 15% off.

There are also many affordable 5-star Macau hotels at less than $115 per night to choose from. Hotels in Macau are definitely more wallet-friendly than those in Hong Kong.

Venetian Macau is humongous with many high-end shops, food court and it’s like a maze. Anyone can easily get lost there, and I’m not kidding. I think the purpose is to keep you disoriented so you never get out of it. I spotted the famous Koi Kei (鉅記) bakery outlet (specialized in making almond cakes, egg rolls) in Venetian but the price is 10-15% higher than other Koi Kei stores on the island. Buy here if you are really short of time. 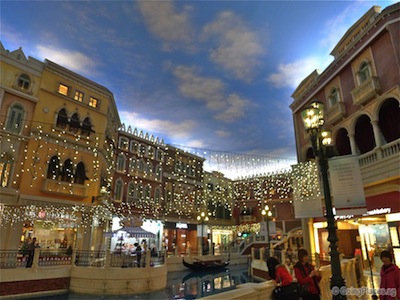 Next, we visited the casino of course! Since we came all the way here and it’s free to enter (In Singapore, we Singaporeans have to pay S$100 casino entry levy to enter MBS Casino or Resort World Sentosa Casino), we might as well go in and try our luck! My wife ‘donated’ HKD200 on slot machines (aka one-arm bandit or 老虎机) and lost all the money in 45-minutes. I was luckier. I ‘invested’ HKD200 and won HKD700. In the end, we netted off with HKD500 gain which helped to subsidize half of our ferry tickets. 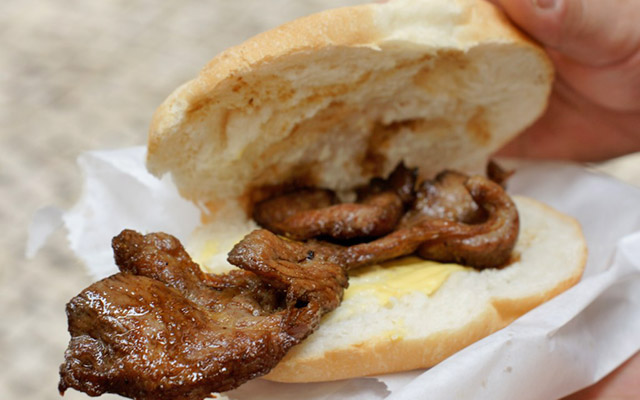 Photo by b cheng

Having some spare cash on hand, we explored the shops in Venetian but bought nothing as they are all high-end retail shops which didn’t appeal to us. After 30 mins of window shopping, we got bored and decided to take a taxi to Rua Do Cunha or 官也街 (Guanye Street). Taxi in Macau is relatively cheaper than Hong Kong as their fare starts from HKD15 onwards compared to HKD20 in Hong Kong.

Guanye Street is a very short street with old Macau buildings housing famous Koi Kee bakery and some other restaurants. Quite touristy, but still pleasant. We had lunch at a Shanghainese restaurant and its soya-sauce chicken is quite tender and tasty. I had a light lunch as I intended to taste the famous pork chop bun from Cafe Tai Lei Loi Kei (大利来记猪扒包), just a few streets away from Guanye Street. Cafe Tai Lei Loi Kei is situated in a single storey old building built in the 1930’s at the corner of Rua do Regedor and Rua Correia da Silva. The stand does not have any tables nor seats, so you are expected to buy the pork chop buns (HKD$25 each) over the counter and eat it standing. There are however some benches outside the building but mostly occupied by fellow pork chop bun fans.

The famous pork chop bun is made up of a large piece of pork chop (with bones) slapped between two fluffy and chewy buns. No secret sauce or whatsoever. What you see is what you eat – basically the pork chop is marinated well enough for just eating it on its own. I personally give it 6.5/10 as I find the meat a bit too dry for my liking. The row of restaurants across Café Tai Lei Loi Kei looks interesting too. I regretted having lunch at Guanye Street and leave no stomach for food tasting at these restaurants. 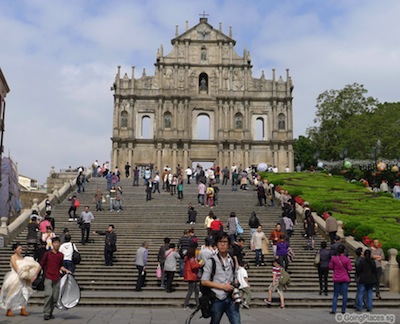 Next, we took a cab to the most touristic place in Macau – St. Paul’s Ruins (大三巴牌坊). This area is filled with a mishmash of old and new shops selling fashion to local produce of Macau. The shop houses look very old, likely built in the early 19th century. Definitely a good place for photography buffs into old buildings.

As the buildings are built on undulating slopes, this may not be a good place to walk for older folks. My mum’s sharp eyes quickly spotted a store that sells locally made prawn paste (good for making Shrimp Paste Chicken or 虾酱鸡). She also bought a piece of salted fish from the same store. She praised Macau’s salted fish is the best and one big piece of salted fish only costs her HKD90. Funnily, the salted fish does not smell because the store owners packed it so well using plastic cling wraps that only upon very close sniff, you get to smell the “ham yu” (salted fish) pungent aroma. So by the time we finished buying all the stuff from Da San Ba, it’s about 5pm. We decide its time to go back to Hong Kong and we took a cab back to the ferry terminal.

As we bought the return ferry tickets from the same scalper earlier in the day, we thought we could just board any earlier ferry. But again we were surprised once more. Our return ticket timing stated 10pm so when we arrived at the counter, we were told to stand in the “reserve line”. This line only opens 5 minutes before the actual departure time to reserves like us. Luckily we were second in the queue, we were able to board the 6pm ferry instead of waiting for the next ferry.

Overall, Macau trip is a fun and fulfilling one. If given a choice, I would definitely like to stay one night in Macau. There are still lots to see and explore – I mean casinos hopping since the lady luck is still shining upon me.

Next post: Where to Shop and Eat in Causeway Bay Hong Kong Island?