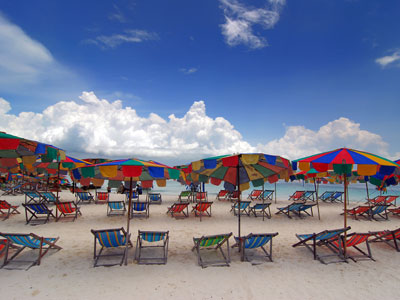 Phuket is Thailand’s largest island and it is surrounded by 32 smaller islands. Phuket is mainly rich in granite and boost of low forest mountains. However, the lack of tall trees could not prevent tourists from enjoying the islands serene and beautiful white-sand beaches. The cabanas, cool crisp air, sun and sea all add to the relaxing and fun ambience that any tourist dreams to experience. But aside from this, Phuket also has a long and colorful history.

A Glimpse at Phuket’s Past

This beautiful island, first called Monton Phuket during the reign of Rama V, was an important trading post for shipping and trading with sailors coming from India, Burma, Arabs, Malays, China and Siam. By the 16th century, European sailors visited the island while Chinese businessmen and traders followed during the 19th century when tin was discovered.

Aside from trading, Phuket’s history is also made colorful by its two heroines – Kunying Jan and Kunying Mook. The heroines led the fight against the Burmese and tasted victory on the 13th of March 1785. Their heroism was acknowledged by King Rama I and they were bestowed a title usually reserved for royalty Thao Thep Kasatri and Thao Sri Sunthon.

More so, the islands history adds to the warmth and charm of the people in Phuket that are composed of diverse ethnic mix. Thai, Muslim, Chinese, European, Chao Le-sea nomads-sea gypsy, Arabs and Indians make the island a melting pot of culture and this is also one of the main reasons why visitors often visit Phuket and enjoy its white sandy paradise.

The Lure of White Sandy Paradise

Phuket is part of a tropical country wherein it experiences wet season from the months of May until October while hot season from November to April. However, visitors who desire to soak in the sun and sea need not worry when they visit this beautiful island during the rainy season. Rains only last for 2 to 3 hours the most while the rest of the day is sunny and bright with temperature between 22 and 34 degrees Celsius.

So, soak in the blue and cool sea of Phuket, bask in the sun and enjoy your watermelon or coconut shake. For the adventurous, you may enjoy different water sports or beach sports with your friends or family.

However, if you are planning a beach break in Phuket, you may want to book hotel reservations in advance. Hotels and resorts usually get full reservations during December, so do expect hotel rates to increase during that time. Still, if you want to enjoy more of Phuket with your friends and family, you may visit the island on some other months and avail of lower hotel rates that could go as low as THB450 or as high as THB2,500 per night.

Luxurious and Affordable Hotels and Resorts in Phuket

For the budget-conscious traveller, you may want to check out these 3-star hotels and resorts below USD80 per night:

For luxurious travellers, the below 4-star to 5-star hotels range from USD100-USD200.

The hotels, resorts and spas offer different amenities comforts that suit your needs and preferences. So, whether you want a place to stay near the nightlife, or you want a serene spa-like resort with lovely cabanas behind the white sandy beaches, Phuket have it all.

One of the charms of going to Phuket is the wide array of delectable fresh food especially seafood. So, whether you want any varieties of fish, prawns, lobsters, crabs and shellfish, you just simply choose what you want. Its prices are also usually based on the weight of the seafood. Yet, generally, its cost ranges between THB100 and THB200.

So, visit Phuket and experience this beautiful and wonderful white sand paradise. Enjoy the fresh food too.