Your gateway to Angkor Wat 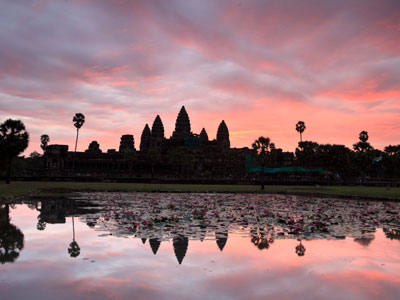 Located in northwestern Cambodia, Siem Reap is the gateway to Angkor Wat and a good jump-off point to other parts of Southeast Asia. There are direct flights to and from Singapore, Kuala Lumpur, Hong Kong, Ho Chi Minh City, or Taipei. Or if you are into long trips on land, you can take the bus to Vietnam, Laos and Thailand.

Most tourists use Siem Reap as gateway to one of the most famous UNESCO World Heritage sites, Angkor Wat. Nothing is wrong with that except that most tourists are missing a great deal of Siem Reap natural beauty and charms. Give some time in your itinerary to tour the city and enjoy its distinct architectural heritage: a mixture of Chinese and French with a touch of indigenous Cambodian culture.

What You Must Bring?

While Cambodia’s national currency is Riel, the U.S. dollar is currency in use. Retailers will give change in small U.S. dollar bills. Some stores may not accept credit cards so it is best to have some U.S. dollars on hand.

There are two distinct climates in Siem Reap: the dry and the wet season. It is best to visit the city from November to February when rains are minimal and temperature is pleasant. But if rains do not dampen your spirit and style, go on from July to October and March to June. Though you have to deal with muddy roads, hotel prices are at its low during the rainy season.

What You Must See?

This is UNESCO World Heritage central tourist attraction in Siem Reap. Situated about 5.5 km North of Siem Reap, this Royal City temple is known as the world’s largest religious buildings boasting of Khmer architecture. Built initially in worship of Hindu god Vishnu and later became a Buddhist temple, this place of worship is your best place to experience the rich cultural heritage of Cambodia. With an outside perimeter of 5,500 meters, Angkor Wat is too huge an area to be travelled by foot or bicycle. It is recommended that you hire an air-conditioned taxi or a Tuktuk, a tricycle with a cabin. Rate is around $15.

This is one of the oldest wats or pagodas in Siem Reap. It is known for the unique paintings on its wall. One of its wall paintings depicts scenes from Cambodian epic Reamker. You should not have a hard time getting around the temple and learning more about Cambodian culture and history with the friendly monks eager to practice their English.

This hip and trendy area of Siem Reap is where you can find rows of restaurants, boutique hotels, and chic specialty shops in quaint charms of French architecture with a twist of local culture. This place gets lively and bright at night, too. Check out the bars and restaurants that offer a variety of cuisine. Try the Khmer House where you get a mix of Chinese, Thai and Vietnamese cuisine starting at $3. There is also the more trendy and high-end Meric restaurant in Hotel de la Paix. A six-course meal costs around $30 per person.

Opened by former soldier, Aki Ra, this museum tells the story of the war and violence that has ravaged Cambodia and its people. On display are landmines and other armaments that were collected by Aki Ra through the years.

What You Must Do and Buy?

After all those walks and temple-hopping, pamper yourself with a relaxing massage at one of the spa houses in Siem Reap. You can get a $10 per hour massage by blind Cambodians at Seeing Hands in French Quarter or a $26 per hour spa at Bodia. If you are out to splurge on body pampering you can go to Amansara Spa.

Do not leave Siem Reap without buying souvenirs from Psar Chaa or the Old Market. Here you can find Khmer silk, antiques, brass items, and even blankets.

While you are learning Cambodia’s cultural heritage and history, you might as well learn some dance steps. Catch a performance of Cambodia’s traditional dance called Apsara. The Apsara Theater in Angkor Village features two performances every night at 6:00pm and at 9:00pm.