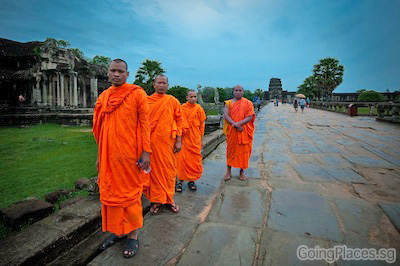 The Temples of Angkor, of which Angkor Wat is the best known, are a collection of over one thousand temples located in the 400 square Km Angkor Archaeological Park and are the reason nearly two million tourists flood to the area every year. They are Cambodia’s crowning glory and achieved UNESCO World Heritage status in 1992. ‘Angkor’ means ‘city’ and was the capital of the Khmer Empire. The Angkorian era of the great Khmer Empire existed from the 9th to 15th centuries and the majority of the temples were built between the 9th and 12th centuries, during the height of the Empire.

Most tourists visit the park for one day, with an entrance fee of $20, but 3-day ($40) and 7-day tickets ($60) are also available. The 3-day ticket enables you to visit the park any three days within a week while the 7-day ticket allows you to visit any seven days within a month. Tickets are valid 5am to 5pm with many people choosing to watch the sunrise at Angkor Wat. You can also enter after 5pm to view the sunset for free. Many people choose to watch sunset either at Angkor Wat or Bakheng Hill.

Tickets are non-transferable and can only be bought at the three Aspara Authority locations: at ticket booths on the road to Angkor Wat, at the airport or at Banteay Srei. Your photo will be taken when you purchase your ticket and will be visible on your pass, along with the dates of the ticket’s validity. Staff check passes each time you enter a temple area so ensure you keep your pass handy at all times.

Tuk-Tuk – Hiring a tuk-tuk for the day is the common way to visit the temples. You will have no shortage of offers for drivers when you arrive in Siem Reap.

If you take a tuk-tuk from the airport or bus station, your driver will inevitably offer to be your guide for whatever day you plan your visit. Some hotels have regular drivers working for them and can arrange everything for you. The price varies but is usually around $15 per day for a tuk-tuk with car taxis costing around $25.

Motorbike – Foreigners are prohibited from renting a motorbike themselves but it is possible to rent a motorbike with driver for the day for around $10. For all of these options prices go up if you want to visit some of the most distant temples, Banteay Srei for example.

Bicycle – Some people choose to rent a bicycle and see the temples at their own pace. Bicycle rental is around $2-4 per day. Remember, if you choose to do this remember to keep hydrated as it can temperatures remain high in Cambodia for most of the year.

Helicopter / Hot Air Ballon – For more adventurous, you can view the temples from above either by helicopter or hot air balloon. Helicopter flights should cost $100-120 for 10-15 minutes and can be booked through travel agents in Siem Reap. There is also a static balloon just outside the park’s entrance which gives you great views of the site. The balloon ride last around ten minutes and costs just over $50 per person, the balloon can hold up to ten people. It is particularly popular around sunset.

Although some tuk-tuk drivers may be able to give you some rudimentary facts about the main temples, the level of English spoken by drivers varies greatly. Licensed English speaking guides can be hired for around $20-25 but you may pay more for guides speaking other languages. If you don’t fancy shelling out for a guide you can pick up a guide book for a few dollars. ‘Ancient Angkor’ is one such example and gives a great account of the temples and the age of the Khmer Empire.

There are a huge number of temples in the archaeological park, some visited by almost two million tourists per year and some rarely visited at all. If you only have one day there are a few temples that should be on the top of your list. 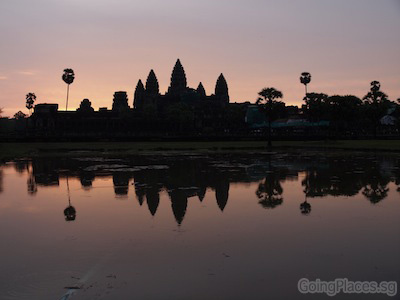 Angkor Wat – the most celebrated temple in the complex is a triumph of Angkorian architecture. It is regularly viewed at sunrise but also achieves great lighting around 1pm. 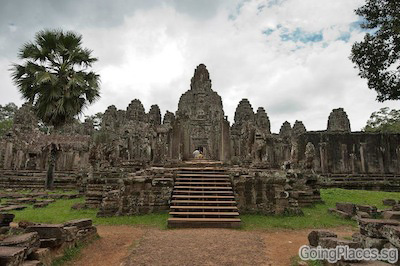 The Bayon – which is located at the centre of Angkor Thom is impressive with it’s 216 carved faces. Lighting here is considered best early in the morning or late in the afternoon. 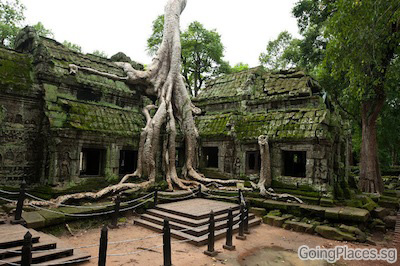 Ta Prohm – a unique place where nature has become intertwined with the temple, trees grow and twist out from the stones giving the temple a magical feel. 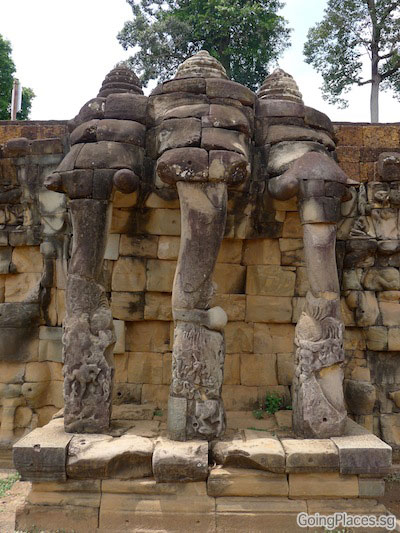 The Elephant Terrace – a 350 metre long stand with carved elephants and lion statues that would have been used during royal ceremonies.

Temples are still considered holy places by the Khmers so modest clothing is expected. You are not obligated to give donations when you walk around the temples, unless you have lit incense when offered in a shrine area.

Visiting the temples can be a long, hot day and it important to stay hydrated. There are a number of places to eat and buy drinks at Angkor Wat and Angkor Thom. At other locations look out for sellers with cool boxes of water and other soft drinks, although prices can be a lot higher than you’d find in Siem Reap.

During your visit to the temples, children and locals will approach you for money or sell you souvenirs. Try to remain patient but if it becomes too much it is acceptable to ignore the sellers until they lose interest. There are a number of permanent souvenir stalls around the main temples of Angkor Wat and Angkor Thom, during the low season you should be able to haggle with the store owners to pick up some great bargains.