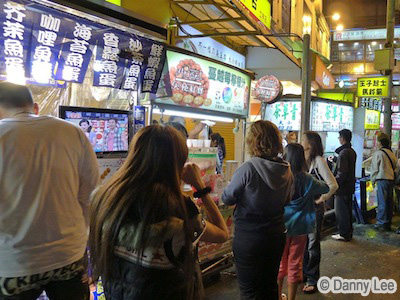 One of the main attractions of Taipei is the variety of tasty food at the night markets. I guess many Singaporean has watched the Taiwanese eating show (食尚玩家) hosted by a pair of wacky skinny men and a pretty big eye girl.

In the TV show, tasty looking snacks were featured from the various Taipei night markets. Whenever a particular stall is featured, it always makes me salivate because they make the food look so delicious and tantalizing!

And I promised myself if I ever visit Taiwan, I’ll try the snacks at the night markets!

In December 2010, I visited Taipei with my wife. One of our “Must-See, Must-Eat” was to visit as many night markets as possible!

During our short stay in Taipei, we managed to visit three night markets:

Like any typical Singaporean, we tried many types of street food. And frankly, after two nights of mostly oily fried snack food, we wanted a proper dinner. We found a restaurant at the end of Raohe night market that very much like Singapore’s “Zi-char”. 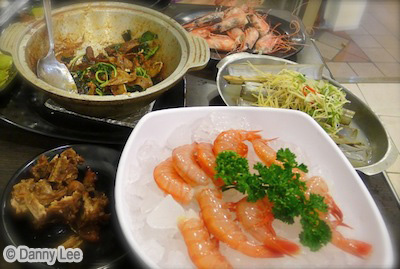 The restaurant owner told us he just took delivery of some super fresh prawns and bamboo clams. So, we took his recommendations and had the prawn sashimi, prawn heads stir-fried with sea salt, and steamed bamboo clams.

The prawns were indeed very fresh and sweet that dipping them into the wasabi would had ruined the taste. As for the bamboo clams, it was sweet, tender and the aroma that wafted up from the dish is indescribable.

It was a memorable seafood dinner. And a truly authentic Taipei night market experience.

Up next… Shilin Night Market – 士林夜市