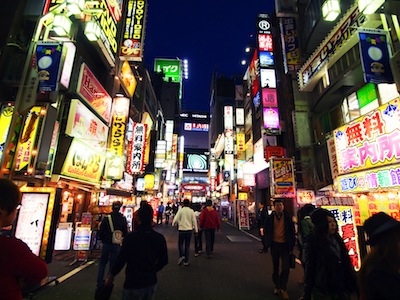 Tokyo nightlife begins when millions of Tokyoites unwind after long day spent in the office and head straight to one of these Tokyo’s nightlife hotspots:

As trains stop running at 12 midnight and only start up again around 5am, Tokyoites either go out directly from work and catch the last train home or start their night later and head home on the first train. Often, they’ll chill out at the nightlife hotspots first and end the night at a Karaoke bar. 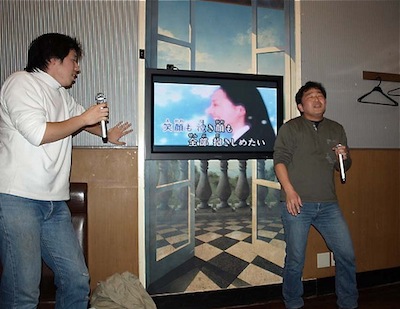 As Karaoke is hugely popular in Japan, it makes for a hilarious evening among friends and is definitely a highlight of any trip to Tokyo. You’ll see advertisements for karaoke bars all over Tokyo in the same buildings that house izakayas (Japanese pubs – 居酒屋), restaurants and bars.

Prices vary but you pay hourly per person, usually with one drink thrown in free, and then more per hour for extra deals such as ‘all you can drink’ and food dishes. Many of the establishments also do ‘happy hour’ prices during the week when they are less busy, which is worth checking out.

If you agree to one hour initially you can always extend as you go, but with the difficulties of the language barrier it pays to make absolutely clear how much the booth will cost to avoid any nasty surprises when you leave. Most karaoke bars are open 24 hours a day and make a perfect place to hide out and wait for the trains to start running again!

Tips: Information you need to know about clubbing in Tokyo
– You must be at least 20 years old to drink in Japan legally;
– You need to show a photo ID to enter any clubs;
– Be prepared to take a taxi back to hotel if you stay out late as Tokyo Metro closes between 12 midnight and 5am;
– Entry fees of most clubs are between 2,000 Yen and 4,000 Yen and it usually comes with two drinks.