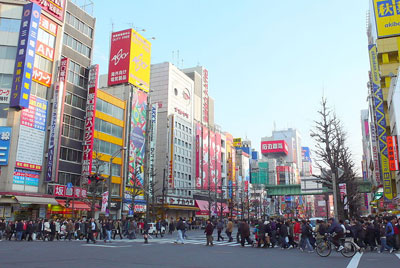 Akihabara(秋葉原) is a techno junkie’s paradise. The area has grown popular enormously over the years and has become Tokyo’s gaming centre, as well as a place where all latest electronic Gadgets can be bought.

Many gaming stores have multiple levels, each focusing on a different type of gaming – from retro arcade games to the most hi-tech interactive gaming units. There are even plenty of old-fashioned machines where a few Yen will give you a chance to try and grab various toys. Head to Akihabara in the afternoon and you will see groups of businessmen gathered around the consoles, in work suits with briefcases in hand!

The area houses hundreds of Japanese electronic stores selling everything electronic you could possibly imagine, including personal robots! Used electronics stores selling MP3 players and cameras to laptops are generally well stocked too.

This makes Akihabara a great place to head to buy new, second hand products as well as spare parts, and even get your electronics repair there. When looking for electronics in Akihabara, it pays not to buy the first product you find as you are likely to find a cheaper one at another store. Some stores will also do discount if you ask.

Many of these stores are located in the side streets leading out from Chuo-dori. The trick is the further away from Akihabara’s main road you walk, the cheaper the price. But the further from the main street you go, the less English shopkeepers will speak, and the less likely you are to strike a deal.

Don Quijote(ドン キホーテ) is a huge store selling all kinds of discount goods, from electronics to fashion items to groceries. It is also where AKB48, a famous cutsie Japanese band, performs shows a number of times each week.

On Sundays, the main road is closed to traffic and becomes a flea market. The street becomes lined with street performers and people dressed as manga characters, all of whom are great to watch.

Some of the larger stores in the area can arrange a sales tax exemption if you spend over JPY10,000, which saves you 5%. Stores like Laox, which has four stores including a duty free goods store, and Sofmap which has twelve stores in Akihabara, specialize in selling used goods, such as cameras.

Akihabara is also increasingly associated with the subculture of manga and anime (Japanese comic and cartoon) loved by Tokyoites. You’ll find endless stores with floors of manga comics and various collectibles, from manga-style dolls to characters from retro TV shows. These shops are amazing to walk around. Mandarake(まんだらけ) is one of the biggest and best known. However, many of these stores don’t allow you to take photos inside. If you are interested in Anime, you could also head to the Tokyo Anime Center which puts on Anime-related events and exhibitions and sells various souvenirs. 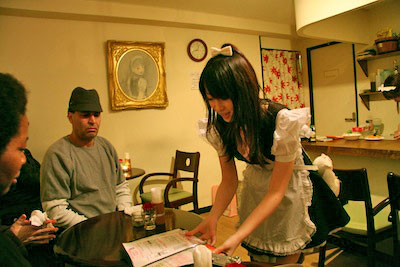 The rise of manga stores created the phenomenon of maid cafes where waitresses dress up as maids or manga book characters. One of the best being Cure Maid. Other novelty cafes include “Manga Kissaten” (漫画喫茶) – comic book cafes which are much like an internet cafe with an added manga comic book library.

Lastly, for a very different drinking experience, try one of the area’s cat cafes in which Tokyoites pay to play with cats whilst having a drink. Neko JaLaLa is one such cafe in Akihabara.

Akihabara station is located on the main JR Yamanote line(山手線) in-between Ueno(上野) and Tokyo(東京) stations. It can also be easily reached from Shinjuku on the JR Chuo line, or by the Hibiya(日比谷) or Ginza(銀座) subway lines. Exiting from the station and heading down the main street, Chuo-dori, you will be greeted with countless neon signs advertising gaming companies and venues.